The following is an excerpt from Religious Liberty: How the Gospel Shapes Our First Freedom, a 6-week Bible study by Phillip Bethancourt and Andrew T. Walker with Russell Moore that articulates what the Bible teaches about religious liberty through an overarching biblical theology. Find more information at lifeway.com/religiousliberty.

Today, religious liberty is under threat unlike any other point in American history. A principle that is so much tied to Christianity itself, and a principle at the heart of the founding of America, religious liberty has tragically shifted from being an issue of bipartisan agreement to an issue now deeply politically divisive. Religious liberty has become an unwanted combatant in today’s culture wars that needlessly escalates tension and divides people.

How so? In the media, it is common to see scare quotes placed around “religious liberty,” which is a way to casually dismiss or mock those for whom religious liberty is important. Many in government adopt the phrase “freedom of worship”—a distortion of the broader understanding that not only are we to be free when we worship inside our churches, but we are to be free to exercise our religion in all areas of our life. 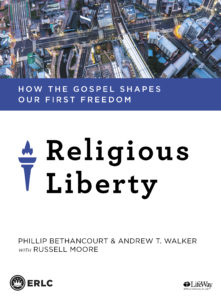 What is Religious Liberty?

Religious liberty is the freedom for all people to live out their faith according to their deepest convictions. To be free means to be unhindered. A commitment to religious liberty means that someone’s religious convictions must be freely chosen. Belief cannot be forced or coerced. It is impossible to make someone believe something that a person does not believe in.

Religious liberty means that individuals are free to live out what their faith teaches in every area of life. It must be said upfront that there are indeed limits to what someone is free to do when exercising his or her religion. No one is saying that it is permissible to lie, steal, or kill under the protection of religious liberty.

Religious liberty also has a government component. In societies with religious liberty, the government has typically taken the position that they do not control every aspect of a person’s life. When this happens, it is good. A government that understands it is not absolute, or does not try to play the role of a sovereign God, is staying true to God’s mission for the state. Therefore, religious liberty is a right that government recognizes. It is not a grant that is given to us.

Why Does Religious Liberty Matter?

Religious liberty allows Christians to practice their faith freely and unhindered in the public square. Religious liberty reduces the stigma around religious belief by expressing the idea that deep convictions about the world and morality is a common experience for all persons, and that all persons should be given as much space as possible to live out their convictions. Moreover, religious liberty produces human happiness. Imagine being told you cannot live out your convictions. Or imagine being told that you have to believe or agree with something you believe is immoral, wrong, or even dangerous. A person who is not free to believe or act on those beliefs is not free in any sense of the term.

Religion matters greatly to the common good. No one is living this life totally separate from everyone else. We all live in communities. And some communities are more diverse than others. This means that society, if it wants to be free, has to design a way for people to live together despite having many different, and even conflicting, views about what is true, good, and beautiful. Religious liberty is what makes that life possible. By committing to respect someone else’s religious liberty peacefully and to seek understanding, we ensure that others in society respect our religious liberty. Seen in this light, religious liberty is reciprocal—it requires us to give liberty to others and to receive that same right at the same time.

For Christians, religious liberty matters to Christian mission. The ability, for example, of the Southern Baptist Disaster Relief Network to do their work requires that they be given the opportunity to do what it thinks is a duty or an obligation: Helping people that are in a disaster shows God’s love to humanity, and all people deserve compassion as image bearers. In all the countless ways that Christians advance Christian mission, whether through one-on-one evangelism or through missional opportunities, religious liberty ensures that people motivated by faith are welcome in the public square and go about showing Jesus’ love. Moreover, the ability to authentically follow Christ is strengthened when a state or government does not see Christianity as a threat.

Where Did Religious Liberty Come From?

Religious liberty is not a new concept. While scholars debate the exact origin, as early as the Church Father Tertullian, there is evidence of Christianity’s involvement in promoting religious liberty. Around 200 A.D., Tertullian remarked: “It is a fundamental human right, a privilege of nature, that every man should worship according to his own convictions. One man’s religion neither harms nor helps another man. It is assuredly no part of religion to compel religion, to which free will and not force should lead us.”1

Christian doctrine also promotes a concept like religious freedom (though that exact phrase is missing from the Bible). At the beginning of Genesis, God is the Creator, and we are His creations (see Gen. 1). This means that there ought to be no barrier between the Creator and His creation. No government can play the role of God since government is an institution designed to serve God (see Rom. 13). Moreover, the God of the Bible wants us to voluntarily worship in spirit and truth, not under compulsion (see Ps. 138:1; John 4:23-24). And lastly, when Jesus gives the Great Commission and throughout the early church, the implication is clear: Get the gospel to as many people as possible with as few hindrances as possible (see Matt. 28:16-20; Acts 4:18-20).

In a period called the Enlightenment, political philosophers began to focus heavily on individual rights. According to this thinking, each individual possesses inalienable rights that come with being a person. Every person possesses these rights regardless of abilities or intelligence. One of those rights was the right of conscience. To this way of thinking, every individual possesses a conscience, which should be protected at all cost possible. To be free to exercise one’s conscience was one of the fundamental principles at the heart of liberty. This viewpoint was the foundation for why religious liberty was protected in the Constitution: The American Founders knew that to protect the whole person, the right to believe and live out those beliefs is fundamental.

In the Baptist tradition, religious liberty stands out as one of our most distinguishing legacies. From English Baptists to Colonial Baptists like John Leland and Isaac Backus, our Baptist ancestors believed that it was wrong for the state to interfere with the mission of the church, and for the church to become subservient to the state’s demands. Baptist played a very influential role at the founding of the United States, ensuring that religious liberty would be a hallmark of the U.S. Constitution.