The following is an excerpt from Echoes of the Reformation: Five Truths That Shape the Christian Life, a 6-week Bible study examines the five core truths that came from the Reformation. Group members will explore these essential convictions of the faith and emerge more immersed in the gospel of Jesus Christ. Find more information at lifeway.com.

On October 31, 1517—a decade after his ordination as a priest—Luther nailed his now famous 95 Theses to the door of the All Saints’ Church in Wittenberg, Germany. Of all these 95 affirmations and concerns, the main point was simple: you can’t buy God’s grace, and you can’t override the authority of the Bible. The Roman Catholic Church had missed these truths, and that was a dangerous place to be.

The Church had begun selling indulgences, certificates from the Church guaranteed to reduce the punishment of sins. As Luther saw it, money was also corrupting everyone in power. On top of that, the Church taught that the pope could receive direct revelation from God—that he had the same authority as the Bible itself. These problems and more pushed Luther to the edge. Like any good leader, he took action. Like any good pastor, he cared for his people. He stepped out when no one else would. 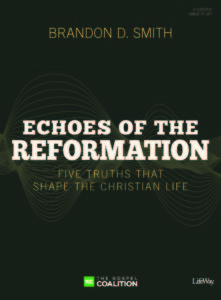 It’s important to understand that Luther wanted to reform the Church, but he didn’t want to spark a divisive reformation. He wasn’t trying to start a new denomination. He was just trying to be faithful to God’s Word. As he once said, “I ask that men make no reference to my name; let them call themselves Christians, not Lutherans.”4 But his convictions were strong, and his concerns were legitimate. The gospel compelled him to ignore the dangers associated with stepping out in faith, even when the road wasn’t going to be easy. Proclaiming the truth meant more to him than the backlash he would receive for defending it. Luther wasn’t spreading his theses around in little gospel tracts. He wasn’t shouting his complaints from rooftops or using some sort of medieval Facebook to tell his friends how angry he was. By nailing his letter to the church’s door, he was actually inviting debate in a way common for his time.5 He wanted to discuss the truths of the Bible with others. He wanted truth to reign. If they were right, Luther thought, they would demonstrate it by proving him wrong.

But Luther was a bold personality. Don’t let his trembling first-mass incident fool you. He was a brilliant theologian and philosopher with a witty and pointed sense of humor. By 1518 his controversial writings began to pick up steam. His issues with the Church’s teaching were gaining popularity. He was beginning to transform from frustrated priest to budding revolutionary. And the Church wasn’t happy about it.6

Luther appeared on trial in 1521 at the Diet of Worms. This had nothing to do with eating worms, by the way. Worms was a town in Germany, and a diet was an assembly held by the leaders of the Holy Roman Empire. At Worms Luther was asked to defend himself. His response summed up the spirit of the Reformation:

I am bound by the Scriptures I have quoted and my conscience is captive to the Word of God. I cannot and I will not recant anything, since it is neither safe nor right to go against conscience.7

Luther was never formally punished for his battles against the Church because he fled Wittenberg. While in hiding, he most notably translated the entire New Testament into German. In 1521 the Diet of Worms reached a decision declaring that Luther was a heretic and that no one should follow his teachings. Unfortunately for the Church—but fortunately for us—his influence couldn’t be suppressed. The Reformation had begun.

The Aftermath of the Reformation

From 1521 to 1522, while Luther was in hiding, he began writing letters to people back home, and they wrote back telling him stories of freedom. Monks were marrying nuns, monks were filling in their bald spots with hair, and people in the churches began taking communion themselves.

While these actions may seem normal to us, they were madness to the Roman Catholic Church. Luther celebrated these freedoms but warned against letting this liberty become more about clothes, diet, and haircuts than about worshiping God.8 Luther wanted people to have freedom to worship God as He’s revealed in Scripture and to understand salvation through Christ alone. Nothing more, nothing less.

Luther returned from hiding in late 1521 to find fellow Reformers pillaging Catholic parishes and vandalizing icons to Mary, carrying knives while they did it. Luther quickly reminded his followers that he didn’t seek to create a violent insurgence. “Preach, pray, but do not fight,”9 he warned. He saw his work as faithfulness to Scripture, not a war on the Roman Catholic Church. He didn’t set out to destroy; he set out to reform. God’s people aren’t to treat their freedom like a badge of honor; rather, they’re to obey God’s freeing Word. Luther returned to Wittenberg to convince believers of just that. He wanted them to find their identity in nothing but Christ alone.

Even Christians are prone to wrap up our identities in things other than Jesus Christ. For Luther, it was first his father’s approval. He wanted to be a priest, but his father wanted him to be a lawyer. This was the greatest identity crisis of Luther’s life, and it nearly wrecked him.

But then Luther had another identity crisis—one all Christians can relate to. He knew God had called him to be a priest, and he embraced that calling. But beyond his priestly robe, Luther was a sinner in need of grace. His sin tortured his soul much more than a bad sermon ever could have. And when he went to the pages of Scripture, he realized that he couldn’t buy God’s grace. God’s grace was a free gift.

I identify myself as a husband, a dad, and a writer. All of these roles are truly parts of who I am, and I love being all of them. But those identities are temporary, limited to this earthly life. In eternity I’m a child of God. That’s my true identity. And that’s your true identity. As we discussed in the group session, we aren’t our personality type. That might be a part of the way God wired us, but it doesn’t define us. Personality type or any other human attribute can become a crutch more than a set of wings.

We must go to Scripture with confidence that we’ll find there the truth about our identity. We must recognize that sin is costly, but grace is free. We must join Luther in proclaiming, “I am bound by the Scriptures I have quoted and my conscience is captive to the Word of God.” In our unbelief we must quote one of Luther’s favorite passages, Mark 9:24: “I believe; help my unbelief!”10 May God define us, nothing else.